Naming all of the symptoms of an allergic reaction on paper can help people, especially the non-allergic, remember them.

If you have allergies, however, you know the feeling you get when something isn’t right. Whether it’s a visible symptom on your skin, or pain and/or constriction on the inside, you know something bad is happening. And your mind becomes focused on it.

A serious allergic reaction can start within minutes of coming into contact with an allergy trigger—or hours after the fact. They may include any or all of these symptoms. Know how to spot the signs and remember them by this handy acronym: Think “FAST.” 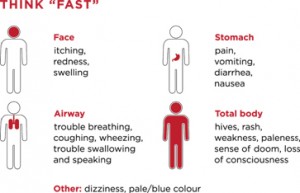 It’s important to note that these symptoms happen independently of each other and may be different from one reaction to the next.

Knowing how these symptoms feel is important. We’ve asked members of our youth panel to describe what they felt in these situations.

“It really felt like my world was collapsing in the pit of my stomach.”

“Metallic taste in my mouth.”

“I knew something was very wrong and it took me a few seconds to piece together the symptoms and conclude that I was actually having an allergic reaction.”

“It started with a tingling sensation on my tongue and lips that quickly moved to tightness throughout my mouth and throat. It all happened so quickly.”

Most importantly, when you feel any of these symptoms, and suspect it might be an allergic reaction, seek help immediately and do not isolate yourself. Be prepared to treat your reaction. You will learn more about this in the next chapter.

Quick Tip – A biphasic reaction is when the symptoms of an allergic reaction reappear after the initial treatment. This is why it’s so important to get to the hospital to make sure the reaction is completely gone.

With Mike now gunning it for the beach Jay walked back towards the motors, and facing out to sea, steadied himself with his thighs against the motors, leaning out over and holding onto the back of them. As Mike hit the beach the momentum surging Jay backwards and assisted by the kick of the skegs hitting the beach, both motors eased up and locked in place. Roaring, hissing and spitting water and sand until Mike shut them both down.

What a rush, and now again, what a contrast. Wet and wild, hair-raising and deafening, to instantly, high and dry, motionless and silent. Isolated in perfect nature, to surrounded by a throng of humanity.

Mike jumped off and strode casually towards where the ‘Landy’ was parked, while Jay sat there for a moment as the sounds of the beach drifted slowly back into his consciousness, inquisitive onlookers coming in for a closer look. He stood up, untied the hatch and took off the cover for everyone to have a look at the bounty. He allowed a couple of exuberant kids to jump on board and get a closer look. It was part of the unique holiday experience and vibe that he enjoyed. The bubbliness, the different characters, the banter, the questions, the praise and admiration.

But this time there was something strangely different. There was a warmth, a connection, a silent powerful buzz. He jumped down onto the beach, it always seemed a lot more solid than when he had left it early in the day. Sort of like the feeling you get after you get off of a trampoline. Like the force of gravity had doubled. His body was bronzed by hours in the sun, glistening with a feint touch of perspiration, his long, dark hair bleached at the tips, muscles pumped and honed. The white lines of dried salt giving his skin texture.

What was it, what could he feel? Slowly he turned around and there it unmistakably was. She was looking straight at him. They stared directly into each other’s eyes for what seemed like forever. Jay was confused. Who was she? Did he know her? Everything and everyone around him was a blur. It was as though she was standing on a stage commanding the performance and attention; the supporting actors were peripheral and were just taking up space around her. He could feel his body getting hot. A blast of the most delicious energy reaching deep into his inner most parts and without intention or knowing why he started moving towards her. Drawn to and wanting to bathe in more of what ever it was she had

Then suddenly, he was brutally ripped away. “Hey, what the hell are ya doing boy, get the eff’ing winch out and hooked up, your day hasn’t finished yet!” shouted Mike out the window of the ‘Landy.’ And without hesitation Jay got back to work reversing this morning’s proceedings, getting the boat rolled up over the beach and back into the lagoon. He didn’t have time to think until just before Mike drove off back around to the slipway leaving him with an envious, “Can’t you concentrate on anything except pussy for just one day?” “Crikey man, give it a rest!”

The boat now waiting patiently on the edge of the lagoon rocked as Jay leapt onboard and ignited both motors. He turned the boat upstream towards the slipway and at last had another chance to look around for her. He could already feel she wasn’t there anymore, but refused to trust his instincts as he scoured the crowd and beach for her. But he was right, she was gone