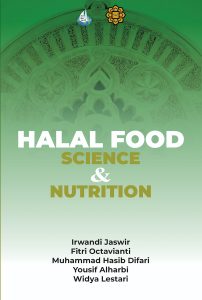 Alcohol used in cooking is common in both Western and Eastern cuisines. European cuisine heavily uses wines and beers in cooking to add depth of flavor to foods. In Asia, rice wine vinegars, and cooking wines such as “sake”, “mirin” and Shao Xing wines are often used in food preparation. Different opinions from Islamic scholars viewed these foods as halal because they are believed to evaporate during the thermal cooking process. However, due to its dubious nature, some Islamic scholars are of the opinion that it is best to avoid the consumption of food, in such cases, as some khamr will remain in the food despite the occurance of evaporation. The Halal Product Research Institute of Universiti Putra Malaysia, produced an alcohol burn-off chart to show how much alcohol is retained after cooking as  shown in Table 6.5. 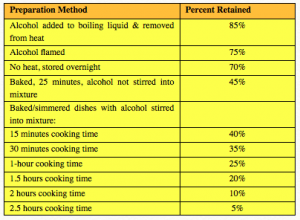 Some popular local fermented products in Malaysia and Southeast Asia  include “Nipah” vinegar from the fermentation of coconut palm sap (toddy), “tapai”, a fermented rice dessert,  rice wine (“tuak”), soya sauce from fermenting soya beans, fermented anchovies “budu”, fermented shrimp “cincalok/ belacan”, fermented durian fruit “tempoyak”, and fermented milk products. There has been doubt as to the halal status of these fermented foods, due to the possibility that it produces alcohol during the fermentation process. However, the jurisdiction in Malaysia has ruled that fermentation in these foods does not necessarily produce an intoxicating product. Thus, the product is considered halal unless it is produced with the intention of producing an intoxicant.

Islam has provisions for foods that are processed to the point that the nature of the substance is changed, and it loses its intoxicating properties , such as when wine is transformed into vinegar. In this case, the principle of istihalal comes into effect. Istihalal is the transformation of the natural characteristics of a prohibited substance into another substance with a diferent name, property or characteristic. The transformation refers to a chemical change, such as fermented dough transformed into bread, or alcohol is transformed into vinegar. However, the   the Muslim consumer has been advised to avoid foods when doubts arise, as juristic opinions continue to differ on the principle of istihalah.

Read the full version of this e-book on e-sentral.com